It's a Saturday evening in late September, which means it's X Factor season.

So, last year I wrote weekly bloglets about X Factor. Some of you may remember this. Most of you probably won't. Anyway, it's that time of year again.

This time round I toyed with the idea of creating a separate, new blog dedicated solely to the X Factor recapping but decided that I wasn't sure that I would continue doing it every year and seeing as I usually ramble and rant a lot in them, they would probably fit quite nicely into Inane Ramblings anyway.

That being said, unless you watch the UK X Factor, these bloglets probably won't make much sense to you, so I will not be offended if you skip reading them (look out for the give away 'X Factor' in the bloglet title).

For anyone who is still interested, the first recap will be up sometime after the first live show. There is a slight problem in that I don't actually know when the first live show will be (haven't been paying much attention to the series this year) so maybe give me a shout if you know? Ta!
Posted by Grover at 19:32 No comments:

My family and I just got back from our summer holiday. We went to Vancouver. Vancouver, by the way, is a FREAKING LONG WAY from the UK. It's about 7500km (a fun 'technical problem' with the 'blade system' meant that we were treated to the information channel on the plane for half an hour before take-off, so I became well acquainted with the statistics).

Aside from being a long way from home though, Vancouver is also a very cool place to visit, and here's why.

1. It has an aquarium which somehow manages to care (like really, actually, properly care) about conservation projects without ramming it down your throat every two minutes or guilt-tripping you into making donations and immediately turning vegan.

2. It has a museum which has such a high percentage of its artefacts actually on display, and not hidden away in storage, that it's practically impossible to see them all (you can take a look at them online if you're worried about missing something, though).

3. It is beautiful. Just amazingly, stunningly, effortlessly beautiful. Rather like me, actually.

4. The wildlife is way cooler than anything we have here in the UK. Don't get me wrong, I love badgers and hedgehogs as much as the next person, but you're not going to convince me that this... 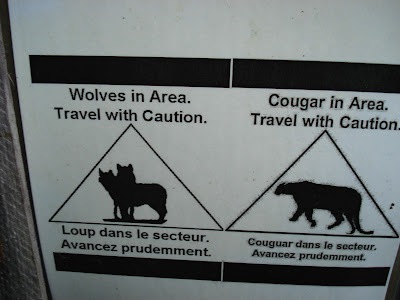 5. It has English chocolate but better versions of it. Cadbury's is pretty much the yummiest chocolate around (that's non-debatable by the way) but while on holiday we discovered that the Vancouverites ... Vancouverans ... Vancouverish ... Canadians get even more interesting versions of it than we do. Like pretzel and peanut butter. Whoever thought of that combination should just retire immediately. There's no way they can better that one.

How about you? How was your summer? Did you visit any cool, new places?
Posted by Grover at 17:31 7 comments:

Grover
Becky Groves. Twenty-something English person who thinks she's cooler than she is. Nice to meet you.